VulcLAN History – More Than 15 Years in the Making

As we are celebrating 15 years of VulcLAN this year, I thought it would be appropriate to take a look back and see where we’ve come from. VulcLAN had it’s “official” beginning back in 2003, but it started a few years before that in the side room of a local computer shop – Dallmann Computers. That was a humble and glorious beginning for all of us back then.

The year was 2000, and Unreal Tournament had been on the store shelves for about a year when Jason Schneider, Dwayne Dallmann, Tia Heide (my wife) and I decided to get our computers together, find a spare 10-base 4-port (not switch – hub), and try out this network thing. We used the lunch room at Dallmann Computers, which was space rented from an embroidery shop, Threads ‘n Motion, from Jason’s dad, Pat Schneider. It was with amazement that we were able to connect computers together to play games. I remember the thrill of watching Dwayne, Jason and Tia move their characters on their own computers and I could see them move when looking at my computer screen.

Fragging ensued, and the addiction to multiplayer gaming and competition was born. Flames were poured on this fire and the next few years found us taking over the entire embroidery shop and cramming as many people as we could onto sewing tables several times a year. We managed a grand total of 18 people spread out on the sewing tables. 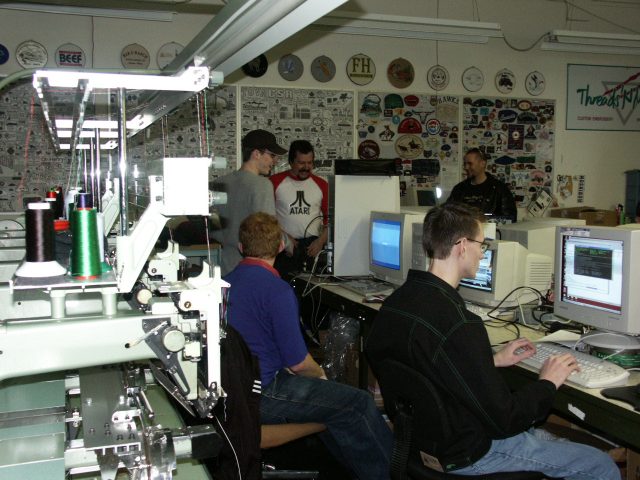 Eventually, we decided to push things a bit farther, and as Dwayne handed us the torch, we grabbed a new name and set out to host annual events with sponsors gleaned from contacts garnered from our case modding website – BensCustomCases (the BCC in BCCHardware). As time passed, BCCHardware became a computer hardware and consumer electronics review site, and we gained more sponsors and supporters as well as gamers.

We are honored to have people attend our event from British Columbia, Wyoming and as far away as Texas, making this event grow, succeed and be one of the most anticipated events of the year (as voted by patrons of VulcLAN).

There are many more stories to tell, many more people to thank and so much to be grateful for. Without you registering, supporting, playing games and drinking horrible things, VulcLAN wouldn’t be what it is today. Hats go off to all who’ve helped make it happen – and it all started with the founding four: Dallmann Computers, Jason Schneider, Tia Heide and Benjamin Heide.

We look forward to many more years of gaming fun and will see you on the virtual battlefield!